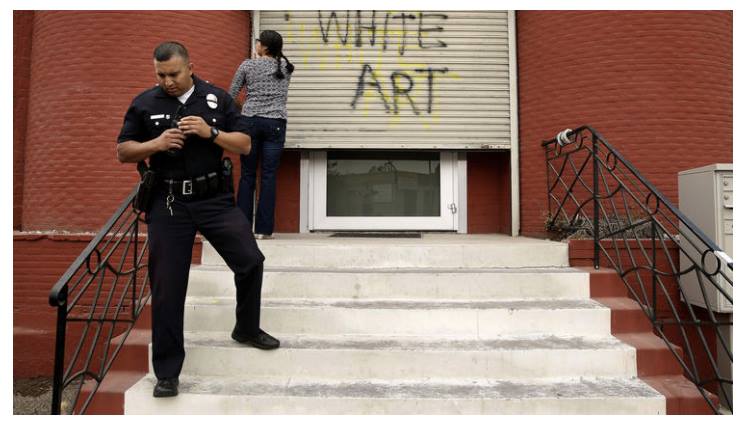 Boyle Heights Alliance Against Artwashing and Displacement (BHAAAD) is a coalition of residents, artists, workers, immigrants, families, students, seniors, and tenants, fighting against the displacement of residents and local businesses from Boyle Heights. BHAAAD consists of multi-ethnic, multi-generational, and LGBTQ community members.

Today we are here in response to the racist accusations that the LAPD and the galleries have made against the community protesting gentrification in Boyle Heights. The LAPD, together with the gallery owners, artists, and investors have chosen to declare a hate crimes investigation because of a single act of graffiti on a gallery door.  While we don’t know who the graffiti artist was we’re here to say that the notion that this is a “hate crime” against white people is a cynical manipulation. The police aren’t here for justice, they’re looking for a time and a place to start harassing activists.

As white people*, we don’t interpret “Fuck White Art” as a personal threat. We understand it as a statement about white supremacy and how contemporary art serves its purposes. Art that is inaccessible and alien to the community serves the ends of capitalist development and speculative investment. We know that an influx of white people is an indication of an influx of wealth, increasing property values, and inevitable displacement. We understand “Fuck White Art” in this context, as a political statement against the role that bourgeois art plays in the process of gentrification.

Here we stand, about a mile from where a 14 year old Boyle Heights youth, Jesse Romero, was shot and killed by the LAPD this year. Jesse Romero was murdered by the police because someone called him in for tagging. When the gallerists call the police to investigate graffiti on their roll-up gate, they are pointing a gun at the youth in this neighborhood and are threatening those who raise their fists in protest with jail or death.

By collaborating with the police, these out-of-touch gallerists are agreeing to intimidate the neighborhood and silence dissent. They have decided that it’s more important to protect private property and the monetary value of their real estate investments rather than the people in the neighborhood.

LAPD has already killed five Boyle Heights residents so far this year. The recent accusations levelled at the community make it crystal clear whose interests the LAPD exists to serve. When the historic murals of this community are defaced there is no “hate crime” investigation from the LAPD. When community members request the “services” of the LAPD, they are ignored or forced to wait hours and hours to receive even the most apathetic and lackluster response from the police. The job of LAPD is not to service the communities where they exist, but to pave the way for capital and profit-making: when galleries and other development move into our community LAPD exists to facilitate their entry and domination. Before, LAPD existed to generate profits for the prison system.

It is a horrible irony that the LAPD would be pursuing a “hate crime” investigation against brown, working class members of this community, when they themselves are the perpetrators of the most vicious hate crimes that occur here: chaining up our youth and throwing them into prison is a hate crime. The daily harassment this community faces on the street is a hate crime. LAPD check-points and ICE deportations are a hate crime. The murder of Jesse Romero was a hate crime. The continued refusal of LAPD to hold their officers accountable for these crimes is a hate crime. How hypocritical of an organization with this history to be levelling accusations of hate crimes against a community’s struggle to solve the problems LAPD has been instrumental in cementing here. We understand the history of LAPD, now and then, and this blatant attempt to intimidate and criminalize resistance only continues the LAPD’s bloody legacy in Boyle Heights.

Boyle Heights has a long history of activism and organized resistance, including the multicultural coalition that protested the construction of the Golden State Freeway, the Chicanx Student Movement of the late ‘60s, the Mothers of East LA who fought tooth and nail to stop the construction of a prison and an incinerator in neighboring Vernon and the mothers who fought against police abuse in Ramona Gardens and Pico Aliso in the 90s.

The members of Union de Vecinos and their neighbors who are active in this struggle against gentrification today have been working for decades to improve their neighborhood. They have facilitated and negotiated truces. They have disarmed the gangs and walked the neighborhood bringing peace. When the buildings these galleries occupy today were still factories, they marched on them, demanding jobs for their youth. The galleries and the other forces of gentrification are looting the value this community has built through blood, sweat, tears and resilience.

We are not here to initiate another argument about what gentrification is and what gentrification is not. We have made this position clear in a number of statements and our purpose today is to address the ludicrous hate crime accusations. We feel we have done this sufficiently, and our demand on the art galleries remains the same: get out. This demand is non-negotiable. Your presence in this community will increase property values. Your presence here will displace families from their homes, their cultures, and their histories. You have to choose to not take part in the process which you have thus far only furthered. Your art is not more important than this community’s right to exist.

This community is more powerful than your investors, board members, your clientele and your army of police. You must choose to remove yourself from this community or come into escalating confrontation with this community’s survival impulses. Our demands are clear, every day that you refuse to leave makes your response to these demands is clear as well.

*This statement was delivered specifically by white members of BHAAAD in response to the claim that “Fuck White Art” warrants a hate crimes investigation.